Hip fracture is a serious injury. It usually affects the older patient, but can occur at any age.

What Is A Hip Fracture?

A hip fracture is a break in the upper part of the femur (thigh) bone. The extent of the break depends on the forces that are involved. The type of surgery used to treat a hip fracture is primarily based on the bones and soft tissues affected and on the location of the fracture.

Hip fractures most commonly occur from a fall or from a direct blow to the side of the hip. Some medical conditions such as osteoporosis, cancer, or stress injuries can weaken the bone and make the hip more susceptible to breaking. In severe cases, it is possible for the hip to break with the patient merely standing on the leg and twisting.

The patient with an acute hip fracture will have pain over the outer upper thigh or in the groin. The pain can be felt in the knee, this is called referred pain. There will be significant discomfort with any attempt to move the hip.

If the bone has been weakened by disease (such as a stress injury or cancer), the patient may notice aching in the groin or thigh area for a period of time before the break.

If the bone is completely broken, the leg may appear to be shorter than the non-injured leg. The patient will often hold the injured leg in a still position with the foot and knee turned outward (external rotation).

The diagnosis of a hip fracture is generally made by an X-ray of the hip and femur.

In some cases, if the patient falls and complains of hip pain, an incomplete fracture may occur which may not be seen on a regular X-ray. In these cases, a special scan called magnetic resonance imaging (MRI) may be recommended. The MRI scan is a useful diagnostic test in equivocal cases and may identify a hip fracture otherwise missed on plain X-ray.

If the patient is unable to have an MRI scan because of an associated medical condition, computed tomography (CT) may be obtained instead. Computed tomography, however, is not as sensitive as MRI for seeing hidden hip fractures.

In general, there are three different types of hip fractures. The type of fracture depends on what area of the upper femur is involved. 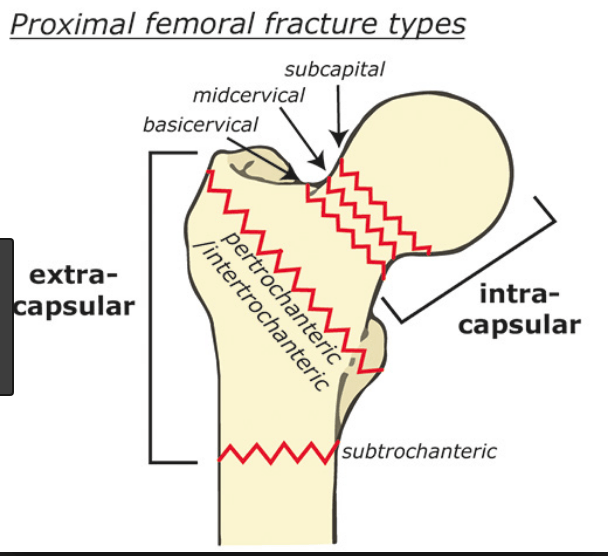 It is anticipated that the total number of hip fractures will exceed 6 million people in 2014. In patients aged between 65 and 99, femoral neck and intertrochanteric fractures occur with approximately similar frequency.

Neck of femur fractures (NOF) are common injuries sustained by older patients who are both more likely to have unsteadiness of gait and reduced bone mineral density, predisposing to fracture. Elderly osteoporotic women are at greatest risk.

The important aspect of a NOF is that, if the fracture is displaced, the blood supply to the head can be damaged and the femoral head can die.

The high morbidity and mortality associated with hip and pelvic fractures after trauma has been well documented. Prognosis is varied, but is complicated by advanced age, as hip fractures increase the risk of death and major morbidity in the elderly.

Most surgeons agree that patients do better if they are operated on fairly quickly. Most fractures will require surgery to allow the patient to get back on their feet as soon as possible and reduce the risk of complications.

Certain types of fractures may be considered stable enough to be managed with non-surgical treatment. However, because there is some risk that these "stable" fractures may instead prove unstable and displace (change position), Dr. Thornton-Bott will need to follow you up in his rooms with periodic X-rays of the area until the fracture has healed satisfactorily.

Stable NOFs can be treated with special screws that fix the head to the neck. Unstable NOFs will usually be treated with a joint replacement. This can be either a hemi-arthroplasty, where the femoral head is replaced with one the same size and sits inside the patient’s own socket, or with a total joint replacement (Total Hip Arthroplasty or THA). The decision is based upon the patient’s age and activity level before the fracture.

This fracture occurs between the large bump of bone that can be felt on the outside of the hip called the Greater trochanter, and a lower bony prominence on the inner part of the femur called the lesser trochanter. The lesser trochanter is an attachment point for one of the major muscles of the hip. The intertrochanteric (IT) fracture is extra-capsular, and as such has much less risk of damage to the blood supply to the femoral head. Because of this the common treatment is internal fixation with either a metal plate and screws or a metal rod, or nail that goes through the fracture and down the centre (medulla) of the femur.

This fracture occurs below the lesser trochanter. Again, as this is an extra- capsular fracture the blood supply to the head is not at risk.

Commonly this is fixed with an intramedullary nail (IMN) system similar to that used in the intertrochanteric fracture, but the nail usually extends all the way to the knee.

In more complicated cases, the fracture of the bone can involve more than one of these zones. This is taken into consideration when surgical repair is considered

Patients may be discharged from the hospital to their home or find that a stay in a rehabilitation facility is necessary to assist them in regaining their ability to walk.

The amount of weight that is allowed to be placed on the injured leg will be determined by the surgeon and is generally a function of the type of fracture and the surgical repair (fixation).

Many patients will lose one level of mobility following a femoral fracture. i.e. if you walk without a stick, you may require a single stick after a hip fracture, and if you use one already you may require two. Despite this, many younger, more active patients get back to a high level of activity following this injury.

The physical therapist will work with the patient to help regain strength and the ability to walk. This process may take up to three months.

Because you will most likely lose muscle strength in the injured area, exercises during the healing process are important. Physical therapy will help to restore you normal muscle strength, joint motion, and flexibility.

A physical therapist will begin teaching you specific exercises while you are still in the hospital. The therapist will also help you learn how to use crutches or a walking frame.

Patients with a hip fracture will always be assessed by the medical team on admission to ensure their fall was not medically related. On discharge following hip fracture and surgery, most patients will be placed on medicine to thin their blood to reduce the chances of developing blood clots for up to 6 weeks.

During the appointments that take place after surgery, Dr. Thornton-Bott will check the wound, remove sutures, follow the healing process using X-rays, and prescribe additional physical therapy, if necessary. 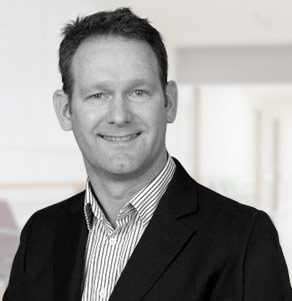